Skip to content
After a big win against coal, NY climate activists are closer to ending all fossil fuel investments
Climate plans

After a big win against coal, NY climate activists are closer to ending all fossil fuel investments

After a big win against coal, NY climate activists are closer to ending all fossil fuel investments A recent surge in youth-led climate activism has revived a near decade-long effort to divest New York from the companies most responsible for causing the climate crisis. Article from WAGINGNONVIOLENCE By Nick Engelfried August 13, 2020 When New York State Comptroller Thomas DiNapoli […] 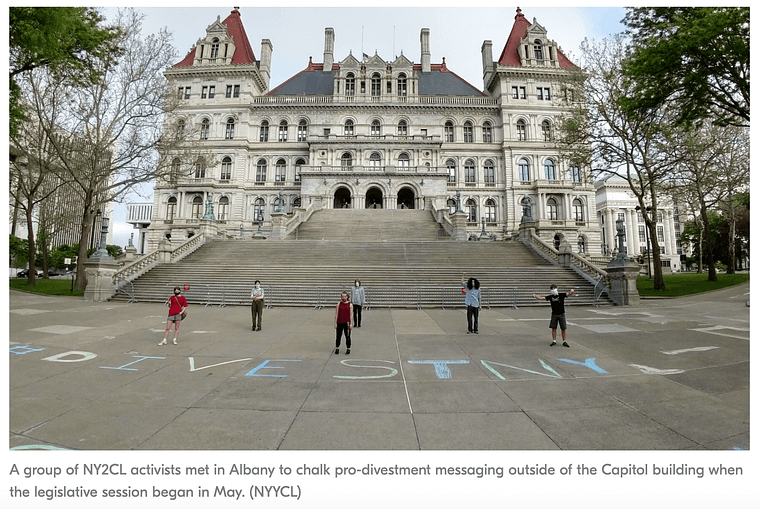 After a big win against coal, NY climate activists are closer to ending all fossil fuel investments

A recent surge in youth-led climate activism has revived a near decade-long effort to divest New York from the companies most responsible for causing the climate crisis.

When New York State Comptroller Thomas DiNapoli announced last month that the state would divest its over $200 billion Common Retirement Fund from more than 20 coal companies, it marked an important milestone for a grassroots campaign that has seen a recent burst of new momentum. In an op-ed published on July 12, DiNapoli stated, “After a thorough assessment, the fund has divested from 22 thermal coal mining companies that are not prepared to thrive, or even survive, in the low-carbon economy.”

This victory is thanks to a near decade-long effort by activists who have been pressuring New York to divest from the companies most responsible for causing the climate crisis. A surge in youth-led activism has brought new energy to this campaign, putting pressure on both the comptroller’s office and state legislators. While New York still has not ended its investments in oil and gas companies, DiNapoli’s decision to divest from coal shows climate activists are having a real impact on one of the largest state pension funds in the United States.

The New York fossil fuel divestment campaign began in earnest in 2012, at a time when calls for public institutions to shed investments in coal, oil and gas corporations were sweeping the nation. A student-led divestment movement that began at Swarthmore College a couple years earlier was being amplified by national climate groups like 350.org, which saw divestment as an effective way to challenge the fossil fuel industry’s grip on political power. The movement soon spread to churches, private foundations and local governments.

Today, more than a thousand institutions across the United States and the world — including colleges and universities, local governments, faith organizations and foundations — have committed to divest a total of over $14 trillion from some or all fossil fuel companies. However, getting state pension funds on board has been more difficult. While states like Massachusetts and Hawaii have seen divestment campaigns gain traction, they have not yet committed to ending their fossil fuel investments. California’s State Teachers’ Retirement System and Public Employees’ Retirement System have divested from coal only.

In New York, activists have argued since 2012 that divestment should be part of the state’s response to the climate crisis — often pointing to the devastation of Hurricane Sandy and coastal communities’ vulnerability to rising sea levels. However, for years divestment proposals have made little headway despite other encouraging wins for the fight against fossil fuels.

In 2015, responding to a years-long public pressure campaign, Gov. Andrew Cuomo’s administration banned the toxic practice of natural gas fracking — making New York the first state with significant gas reserves to do so. (In April this year, legislators codified this executive action into law.) At the local level, New York City announced its largest pension funds would divest from fossil fuels in 2018. The city has also enacted climate policies that include a law requiring large buildings reduce their carbon emissions 40 percent by 2030 . . .

Accordingly, New York climate activists have rallied behind the Fossil Fuel Divestment Act, a bill introduced by State Sen. Liz Krueger and Assembly Assistant Speaker Félix W. Ortiz. A legislative approach seemed necessary, because Comptroller DiNapoli had so far been unwilling to take substantive unilateral action on divestment. DiNapoli has argued the state should instead use its status as a shareholder to advocate fossil fuel companies change their behavior — an approach climate groups are skeptical will work. Last year, ExxonMobil stymied a shareholder resolution supported by DiNapoli that would have required the oil company to reduce its carbon footprint.