Fonda and Martin ask about why CA Legislature tolerates the oil industry’s environmental racism BY JANE FONDA AND DON MARTIN in the THE SACRAMENTO BEE JULY 17, 2020 Of the 1.8 million Californians living near drilling in heavily polluted areas, 92 percent are from communities of color. It is past time to stop sacrificing Black and brown communities to the oil and […] 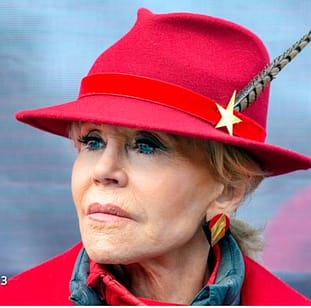 BY JANE FONDA AND DON MARTIN in the THE SACRAMENTO BEE

Of the 1.8 million Californians living near drilling in heavily polluted areas, 92 percent are from communities of color.

It is past time to stop sacrificing Black and brown communities to the oil and gas industry. And this summer, our lawmakers can take the first step to do something about it.

While we both live in the Los Angeles area, you wouldn’t know it from the air we breathe.

I, Don, live 300 feet from the Freeport McMoRan Oil and Gas site in West Adams, South Los Angeles, close enough that I can read a posted sign which says, “This area contains chemicals known by the state of California to cause cancer or birth defects or other reproductive harm.” For me, that sign is not just a warning, it’s my reality.

I wear a vial around my neck wherever I go. It contains the ashes of Rosaline, my wife of 50 years who lost her life to cancer. The hardest decision I’ve ever had to make was taking her, the love of my life, off life support.

My granddaughter, Kiari, was diagnosed with Hodgkin’s lymphoma at 8-years-old. The doctors put a port in her body to inject her with harsh chemicals, to treat the toxic chemicals that blow nonstop into her bedroom window. The treatment made her too weak to play with her friends, so they stopped coming around to see her.

I remember how her hair would come out in knots when she tried to brush it. We bought her wigs, but that didn’t stop the other kids from calling her “Mount Baldy.” One day, Kiari came home from school and asked me, “Grandpa, what have I done to deserve all this?” I don’t know if I can express how it feels to hear your own granddaughter ask you that question.

I, Jane, live in West LA, and I’m very aware that the air my neighbors and I breathe is very different from the air Don and his neighbors breathe. At the beginning of March, when my activism took me an hour south of my home to Wilmington for a Fire Drill Friday in-person rally, my eyes immediately began to burn.

It’s painful to realize that so many people live, work, play and pray in the midst of toxic clouds of crystalline silica, methanol, hydrofluoric acid, formaldehyde and more. I was stunned to see firsthand how oil companies treat these communities as sacrifice zones and their residents as disposable. The assumption, therefore, is that the politicians that allow this situation to continue agree with this view.

We’ve seen a global pandemic reveal the gross existing racial inequities in our healthcare, economic and political systems. Now, a growing movement to confront police violence has left us reckoning with the injustices we’ve tolerated for much too long in this country. We’ve reached a breaking point. The only viable response is to build a more just and livable future for all people. For California lawmakers, this must include passing Assembly Bill 345.

For decades, frontline communities from Wilmington to Bakersfield have been suffering their own public health crisis — asthma and other respiratory diseases, preterm births and high-risk pregnancies and cancer — all at the hands of the fossil fuel industry, which has been given a blank check by California lawmakers to drill next to our homes, our schools and our hospitals.

This crisis threatens our elderly, our able-bodied and even our unborn children. A recent study from Stanford found that pregnant women living near oil and gas wells in California face a high risk of preterm birth, the leading cause of infant death in the United States, with Black and Latinx women facing the highest risks. And yet in the state of California, there is no required distance between oil drilling sites and the communities living, working and playing near them.

While this problem is nothing new, frontline communities are now feeling a public health crisis twice over. A nationwide study revealed that communities burdened by air pollution and pre-existing health conditions are more likely to die from COVID-19. Sacrificing Black and brown communities living near drilling is environmental racism, full stop.

This summer, California lawmakers will consider Assembly Bill 345, a bill that requires the state to create a health and safety buffer zone between hazardous oil and gas extraction wells and sensitive areas like homes, schools and hospitals. The bill would also establish 2,500 feet as the minimum distance to consider in order to avoid exposing people to the highest concentrations of contaminants.

Recent surveys have shown that an overwhelming majority (79 percent) of Californians support a 2,500-foot buffer zone from drilling sites, and also support their lawmakers to do something about this issue. In fact, polling results released last week show that strong support has increased since January, since the spread of COVID-19 and the Black Lives Matter movement have grown.

But despite this support, our elected officials have so far failed to respond to their constituents. The LA City Council recently released plans for a 500-foot buffer zone from new drilling sites (only the new ones!) — a completely inadequate distance that puts public health, safety and the environment at risk. Enough is enough.

If our lawmakers are serious about keeping all Californians safe, addressing systemic injustice and putting us on the right path to a more just and livable future, they must vote yes on AB 345.

While our lived experiences are different, what we hold in common is the belief that we must stop allowing fossil fuel executives to treat entire communities, the overwhelming majority of which are communities of color, as sacrifice zones. As Californians, we must not allow this injustice to hide in plain sight. And it’s long past time our lawmakers did something about it.

Don Martin is a South LA resident and organizer with STAND-LA, living near Freeport McMoRan Oil and Gas site. Jane Fonda is an Academy Award-winning actor and activist living in Los Angeles.