Skip to content
To Secretary Zinke, help veterans who are lawmakers reauthorize the Land and Water Conservation Fund

To Secretary Zinke, help veterans who are lawmakers reauthorize the Land and Water Conservation Fund

August 15, 2018 Oped by Washington State Senator John McCoy As I write, we find ourselves in another “fire season.” This wasn’t always the case in our beloved state of Washington. Now, tragically too many communities are at risk of being torn apart by flames every year. I only hope no one is harmed. I’m thankful for our first responders […] 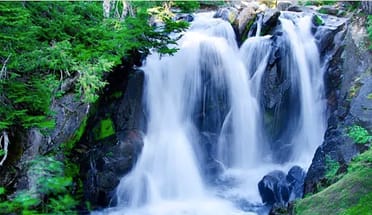 As I write, we find ourselves in another “fire season.” This wasn’t always the case in our beloved state of Washington. Now, tragically too many communities are at risk of being torn apart by flames every year. I only hope no one is harmed. I’m thankful for our first responders for the tremendous job they do protecting us. But every year when we don’t have a substantial snowmelt we know what to expect. The scientific facts show our planet is heating up. We must do everything within our power to protect our natural wonders for future generations, and that takes a bipartisan effort.

Knowing that we are all in this together makes it easier to find common ground to make positive changes for everyone in our state. In my culture, leaders are often seen as peacemakers, not as dividers. I’m a Democrat, who worked in the White House during the Reagan years. Working together is how our democracy works best.

When given the opportunity to defend a citizens’ clean energy initiative – 937 – from major rollbacks I embraced the challenge because I knew we would be successful if everyone worked together to reach a compromise, and we did.

If we don’t protect our natural resources, we risk losing them forever. That’s why I recently signed a letter with other lawmakers who are veterans, in support of the reauthorization of the Land and Water Conservation Fund (LWCF).

Veterans don’t distinguish each other by what political party we are affiliated with, we all stand by and with our Constitution. That’s why I’m proud to stand with over 45 bipartisan veterans who are lawmakers in support of the LWCF. Since its establishment by Congress in 1964, the LWCF has been a bipartisan commitment that safeguards our natural areas, water resources, and cultural heritage.

My culture holds a deep respect for nature. The cedar is our “tree of life” because we use every part of one if we cut it down, from making baskets to totems. Honoring nature has sustained our communities and way of life. Serving on the Environmental Committee I’ve worked to protect our cherished natural wonders.

Salmon is intrinsic to our culture. When it flourishes so does our environment. It’s sustained future is in everyone’s interest. Unfortunately commercial fishing, waterway contamination, habitat destruction, net-pen farming, and road culverts restrict fish habitats. I’m proud we recently passed legislation working across the aisle to phase our net-pen farming by 2025.

The LWCF has been a source of revenue for states and local governments, funding projects to protect habitats like many on the Snohomish River as well as helping to establish recreation areas and parks like Langus Riverfront Park.

Over the past 40-plus years, the LWCF program has provided more than $3.9 billion in grants funding projects in just about every county in the country. LWCF has provided funds for riverside development and upkeep. Sacagawea Heritage Trail, the Salt Creek County Park Renovation, Issaquah Creek/Lake Sammamish Waterways Acquisition, as well as the University Place Kobayashi Preserve have all been received grants from LWCF. The list goes on and on.

We enjoy kayaking, canoeing, swimming, picnicking, and just being able to relax in parks supported by LWCF funds. Over $12 million has been allocated to Washington State from the LWCF just since 2000. You’ve probably been to a park, nature reserve, beauty spot or veterans’ memorial that has been funded with LWCF grants.

A Bureau of Economic Analysis study found that the outdoor recreation economy was growing at 3.8 percent. Outdoor recreation contributes $887 billion and supports 7.6 million jobs across America. Every $1 of LWCF funds invested results in a return of $4 in economic value.

On the national stage generations of Americans have visited National parks. For many, these trips are annual pilgrimages connecting families with our country’s roots while creating lasting memories. Olympic, Mount Rainier, and North Cascades National Parks are assisted by LWCF funding. Our land is intrinsic to who we are as a people.

But now the LCWF is in jeopardy of not being reauthorized even though the U.S. House of Representatives, passed H.R.6147 – Interior, Environment, Financial Services, and General Government Appropriations Act, of 2019, which provides some support for the LWCF. The problem is that the U.S. Senate has not completed its review of the legislation, and while Secretary Zinke has publicly expressed his support for the fund, he has also proposed a 95 percent cut to the fund’s budget.

My military brothers and sisters have banded together as lawmakers to stand with our country defending our public lands. We see this as a bipartisan issue. As the saying goes—if you don’t stand for something—you’ll fall for anything. We can’t afford to lose our cultural heritage, our public lands, by falling for false promises.