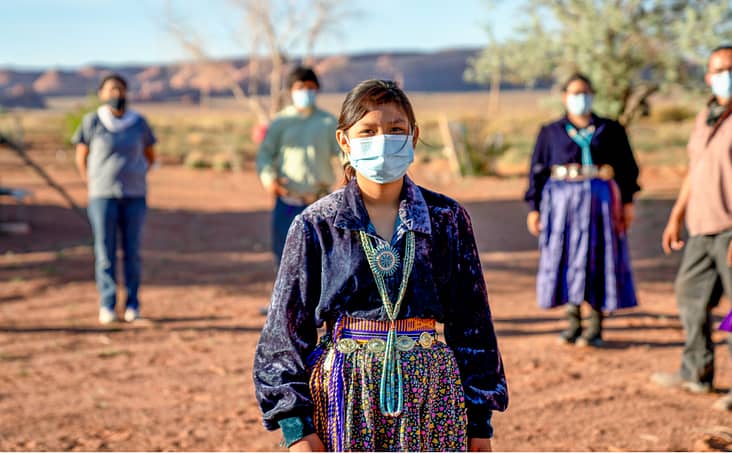 The Navajo Nation, the country’s largest Native American reservation that spreads  27,000-square-mile across parts of Arizona, Utah, and New Mexico, has been one of the hardest hit areas by the COVID-19 pandemic. In May, the Nation reached the grim milestone of having the highest per-capita COVID-19 infection rate in America. Then, with 4,002 confirmed cases, the Navajo Nation averaged around 2,304 cases per 100,000 people, surpassing New York, and New Jersey which were thought to be the ‘epicenter’ of the pandemic. Such statistics are especially alarming because the Navajo Nation has one of the strictest stay-at-home orders in the world.

The rampant number of cases has been attributed largely to the fact that, at a time when hand washing is a matter of life and death, one in three Navajo citizens do not have access to indoor plumbing and forty percent of households lack running water and electricity. The water that is available contains 30 million tons of uranium mining, coal, oil, and fracking toxic waste.

What is perhaps the most distressing aspect of this situation is that all of this was occurring before the pandemic. The Navajo Nation has lacked running water for as long as residents can remember.

Sunny Dooley, a traditional Diné storyteller and a member of the Navajo Nation notes that her great-grandmother used to tell her, “Don’t get used to drinking water, because one of these days you’re going to be fighting for it.”

Fawn R. Sharp, the president of the National Congress of American Indians, notes that the current situation is “simply a symptom of a much deeper problem facing tribal nations for over a century.” Thus, it is impossible to properly discuss the sky-high rates of COVID-19 in the Navajo Nation without discussing why such a disparity exists and how the way America’s society functions allows it to. This question is a complicated one that is layered between years of environmental injustice and a blatant disregard for human value when developers along with elected officials created ‘sacrifice zones.’

‘Sacrifice zones’ are areas that have been permanently damaged by environmental destruction and deterioration, generally due to utilization of the land for energy production or mining. Wealthier, white dominated communities are able to use their privilege to advocate for such harmful activities to occur far from where they reside, and yet still enjoy the energy produced via these zones. Such is reflected in the “not in my backyard” sentiment, a slogan created by upper-middle class citizens who were worried about the health and aesthetic effects of these developments. Thus, the sacrifice zones took over the backyards, front yards, and the life of low-income and minority neighborhoods.

Each time a sacrifice zone is created, the people that inhabit those zones are literally being sacrificed along with the environment. They are being told that society’s reliance on a dwindling energy source is more important than their lives. Hop Hopkins, the director of strategic partnerships for the Sierra Club, notes that society “can’t have sacrifice zones without disposable people,” an excellent way of summing up the true horrors of what is occurring within the Navajo Nation.

The Navajo Nation, for example, is surrounded by coal production, mining, and power plants that provide jobs, electricity, and running water for residents of the major cities which surround the reservation. Yet, the community itself doesn’t have access to such amenities and remains impoverished and vulnerable to extreme health risks of living in that close proximity to fossil fuel, an egregious environmental racism and injustice.

Dooley profoundly states that she sees COVID-19, “as a monster that is feasting on us — because we have built the perfect human for it to invade,” and she is exactly right. Due to the heavy pollution the lungs of tribal members are already weakened, as they are 600 times more likely to die of tuberculosis than any other group. One third of the population has diabetes, heart conditions and lung disease. Likewise, it’s common for those within the Navajo Nation to become sick from years of radiation exposure due to hundreds of abandoned uranium mines in and around the Nation. This is one of the main reasons as to why the Navajo Nation has such high cases of COVID-19: because of preexisting health conditions from fossil fuel related issues.

The COVID-19 pandemic has highlighted the significant costs of pollution and the climate crisis on American communities of color, specifically black and indengious people. For the first time in what seems forever, the media and American citizens are paying attention to and recognizing the ugly and frightening face of environmental injustice. Doctors Without Borders sent teams into the Navajo Nation, the first time the organization was deployed within America.  The Community Organized Relief Effort, an emergency relief nonprofit organization, and The Rockefeller Foundation announced a new initiative to expand free Covid-19 testing and health services in the area. These steps are important.

Photo: Valentina Blackhorse, 28, Navajo pageant nurtured political aspirations while raising her 1-year-old daughter. Then she tested positive for the novel coronavirus. The next day she was dead. She’s not just a statistic.

While aid and attention is essential for immediate relief in reference to the pandemic, this cannot be approached as something that requires a ‘one-time-fix.’ This is much bigger than the current pandemic. It is a systemic issue so embedded in society that daily habits and actions that depend on the fossil fuel industry doubles as justification for the destruction of the planet and its people.

The lifestyle before the COVID-19 pandemic functioned by sacrificing vulnerable populations. When there is a yearn for a return to normalcy, this is what the privileged majority refers to. Even if such a ‘normal’ is possible again, it must be avoided at all costs. Perhaps, rejecting the oil and gas industry and turning time, money, and energy into the ever-promising renewable sector is a long overdue transition in building back better.