Pollution rains down on New York State causing lifelong illnesses that can be life threatening. Courtesy photo. September 1, 2020 By Ramona du Houx The nation’s third-largest public pension system is The New York State Common Retirement Fund issues more than $1 billion in benefits to retirees each month. The fund’s investment portfolio is worth about $200 billion but part […] 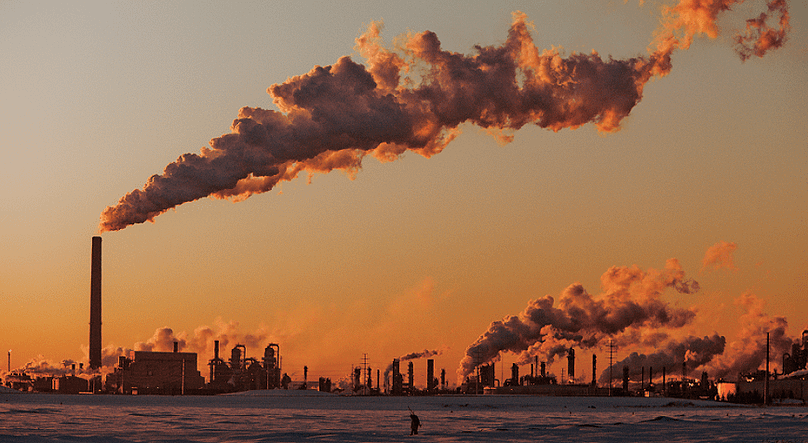 The nation’s third-largest public pension system is The New York State Common Retirement Fund issues more than $1 billion in benefits to retirees each month. The fund’s investment portfolio is worth about $200 billion but part of it is in jeopardy, according to environmental groups and a large group of New York elected officials, called the Elected officials to Protect New York (EOPNY). They want the fund to divest its shares from fossil fuel industries in order to affirm New York’s policy goals of transitioning and supporting renewable forms of energy. The fund’s sole trustee is state Comptroller Thomas DiNapoli, who has held the statewide office for the past 13 years.

Protestors in 2014 kept up the fight which helped ban fracking, now they are focused on divestment. Courtesy photo.

Hundreds of those elected officials signed a letter that demanded the New York State pension fund’s divestment from the fossil fuel industry by 2020. But the EOPNY deadline came and went with little action on the part of the fund’s Comptroller, DiNapoli. Back in 2017, Governor Andrew Cuomo stated he wanted the pension fund to be divested. He still does.

While Comptroller DiNapoli did get rid of the dying coal industry investments, the pension fund is still heavily invested in the oil/gas industry, which causes the majority of greenhouse gas emissions.

Now the New York legislature has gained momentum on the issue and is taking legislative action.

Elected Officials of New York urges DiNapoli to divest, before the legislature forces the issue.

In a July 12 Times Union op-ed, Di Napoli claimed legislative action, “would threaten the independence of the comptroller’s office to make investment decisions solely in the interest of retirees, current and future.”

“While his independence can be debated, those retirees cannot afford to wait for him to divest completely — too much of their hard-earned money has already been lost. That surely has not been in their best interest. New York State pensions are intended to provide secure futures. The state should never gamble with them. But that’s exactly what’s happening in a high stakes game with New York State Comptroller Thomas DiNapoli investing state workers’ retirement funds in the fossil fuel industry, already losing at least  25 billion dollars,” said Albany County Legislator William Reinhard. “That’s unconscionable.”

In a Daily Star oped, and in others (DiNapoli did the rounds), the Comptroller wrote, “Frankly what will happen is the stock would be bought by someone else who does not have our position on this issue. I’m sure that many companies would be very happy if we just sold the stock and did not bother them any more on this issue.” He went on to try and discredit the legislature again, even though he was once in the Assembly.

While the financial risk in continuing on this path are increasingly obvious with stock losses and pipeline closures, what’s hidden are the tragedies the industry causes by locating operations mainly in communities of color in the state — over 4,000 deaths annually.

“Comptroller DiNapoli has to understand this isn’t just about numbers on balance sheets, we’re talking about the health and wellbeing of New York State citizens, who from no fault of their own are dying from aliments related to the pollution caused by fossil fuels production. While he’s wining and dining with CEO’s supposedly putting forth clean energy ideas, people are suffering. Delaying divestment is reckless, and blatantly counter to the interests of those we are sworn to represent,” said New York Assistant Speaker Assemblyman Felix Ortiz, EOPA Council Member and veteran.

DiNapoli doesn’t seem to be accessing the market. The oil and gas industries are not doing well.

Shell and BP had to write off $40 billion of their assets as unrecoverable. BP also announced a 40 cut back in oil/gas operations and an increase in their renewable sector. Recently Exxon Mobil was booted off the stock market as a tech company took its place. Big news for the oil and gas industry since Exxon was the world’s largest company in 2011.

Back in 2012, EOPNY pushed DiNapoli to divest New York pensions from FF corps, warning of the impending risk.

“Currently, companies involved in the fossil fuel industry are at an even greater risk of losing value,” said New York Assistant Speaker Assemblyman Felix Ortiz, EOPA Council Member and veteran. “In combination with the negative impact fossil fuels have on the environment and climate, it’s time to divest now. New York can’t afford to wait.”

Years of expert analysis support divesting the Common Retirement Fund from fossil fuels. 2008 research shows pensioners would have earned $22 billion more by 2018, rather than incurring the current losses.

Only 4 percent of New York state’s energy usage comes from wind and solar – with 36 percent from gas, 32 percent from nuclear and 25 percent from hydro. The state’s pension fund is heavily invested in fossil fuel companies with more than $13 billion.

“The future of fossil fuels is looking grimmer by the day. The best time to commit to divest would have been ten years ago. The next best time to make this commitment is now,” said Mimi Hoffman, a pensioner who receives money from the Fund. “If the Comptroller isn’t going to act on his own, it’s time for the legislature to act as responsible fiduciaries and pass the Fossil Fuel Divestment Act.”

Elected Officials to Protect New York’s work successfully helped New York ban fracking, making history in 2015. But when New York State banned fracking, citing both the drinking water threats as well as climate change it neglected to stop the dumping of fracking waste because of a legal loophole.

Since 2011, New York landfills have accepted over 650,000 tons and approximately 23,000 barrels of fracking waste from Pennsylvania’s drilling operations.  Oil and gas waste is comprised of hundreds of chemicals, many of which are known or suspected carcinogens, heavy metals, salts, and high levels of naturally occurring radioactivity. Improper disposal of these toxic wastes can pose significant threats to nearby drinking water supplies thereby people’s health.

But the loophole still exists federally.