Photo: Organic farm in Maine, courtesy MFT September 1, 2020 By Masha Vernik, Policy Advisor at Peace Rising Soil is nature’s recycling system. It turns death into energy for life. Industrial agriculture throws a wrench into this cycle, turning abundance into scarcity instead. Such a system is doomed to fall, and when it does, so will we. Human survival depends on […] 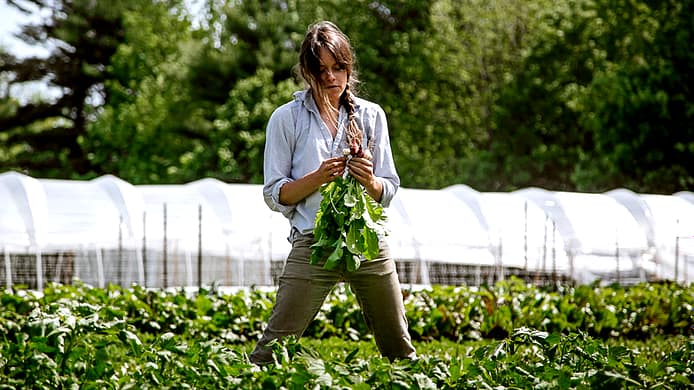 Soil is nature’s recycling system. It turns death into energy for life. Industrial agriculture throws a wrench into this cycle, turning abundance into scarcity instead. Such a system is doomed to fall, and when it does, so will we. Human survival depends on a just transition towards regenerative agriculture, and not just because of carbon capture. Without such a transition, global soil stores of nitrogen (N) could drain. While soil is naturally endowed with the gift of nitrogen transformation, excessive fertilizer use robs it of this gift. Unable to produce or store its own nitrogen, the soil’s productivity and resiliency to climate change suffers. Instead of replacing natural nitrogen cycles, regenerative soil practices amplify them. In doing so, regenerative agriculture assures food security, especially in the face of climate change.

As a building block of DNA, nitrogen is at the very foundation of life. Plants need this nutrient to grow, but it hides in plain sight. Nitrogen makes up 78 percent of the atmosphere, yet remains inaccessible when floating around. Gaseous N2 must become nitrate (NO3–) for plants to build it into proteins. Nitrates naturally enter the soil through a web of micro-organismic reactions that begins with ammonia (NH3–) or ammonium (NH4+). These molecules make their way into the underground ecosystem from decomposing dead matter, lightning, and critically, the atmosphere via nitrogen-fixing bacteria. Nitrogen-fixing bacteria, which live in the soil and in roots, pump nitrogen from the air into the ground for plants to feast upon. Food production has relied on this process for millennia.

But in the beginning of the 20th century, Fritz Haber and Carl Bosch learned how to replicate the conversion of gaseous nitrogen to ammonia. In the 1960’s, the Green Revolution spread fertilizer around the globe. Humans could now do the work of bacteria. Global food production exploded, along with the human population.

Ironically, the very chemical fertilizers that magnified short-term food production also undermine it in the long-term. Fertilizers deplete the limiting factor they purport to make limitless. And because crops rely on both native soil nitrogen and fertilizer for this foundational element, a food production strategy that depends solely on fertilizer has its own limits.

The Morrow plots at the University of Illinois – Urbana have been under production and investigation since the late 19th century. Scientists found a decline in total soil nitrogen in plots that received synthetic fertilizer from 1955 until 2005. They cross-checked this result with dozens of other published studies evaluating nitrogen availability in different types of soils and for various crops, and found the same result – over time, synthetic nitrogen use decreases total soil nitrogen availability.

This result seems strange. Why would adding more nitrogen decrease the total nitrogen content? Excess fertilizer dismantles two components critical to the nitrogen cycle – soil structure and nitrogen-fixation. It renders the soil unable to produce and store its own nitrogen.

Microbes in the soil that break down organic matter feed on nitrogen. When there’s too much nitrogen, these microbes go into overdrive. The structure provided by the dead matter crumbles, squeezing out the space for stored nitrogen. Nitrogen at various points in the cycle has less room to stay in the soil, so it leaches out. Some of it ends up in our waterways and creates dead zones. Other ends up in the atmosphere as nitrous oxide, a greenhouse gas with 300 times the global warming potential as carbon dioxide.

Secondly, synthetic fertilizer hinders rhizobia’s ability to do what it does best – fix nitrogen. These root-dwelling bacteria, which get energy from legumes in exchange for fixing nitrogen, convert a significant amount of gaseous nitrogen into ammonia for plants. But when exposed to fertilizer, rhizobia devolve. They come to harbor genetic mutations in the very location that codes for N fixation. This has big consequences for crop growth: plants whose rhizobia have been exposed to nitrogen grow less than plants whose rhizobia have not.

With soil incapable of storing and producing its own nitrogen, agriculture depends on synthetic fertilizer. The soil’s natural abundance turns to scarcity.

The industrial food system assumes that it can increase productivity by replacing nature. But the truth is, that’s a losing battle. Short-term efficiency comes at the cost of long-term security: All top soil could be gone within six short decades from now. A more resilient and secure food system will build on cyclical ecosystem functions, instead of fighting against them.

To increase nitrogen content, regenerative farmers use cover crops, which grow on fields that would otherwise stand fallow. Leguminous cover crops like alfalfa, clover, and chickpeas host nitrogen-fixing rhizobia bacteria in their roots and increase the soil’s nitrogen content. When their roots decompose, nitrogen enters the soil, now available for crops to take up. Leguminous cover crops also shelter pest-eaters like lady beetles and spiders and thus reduce the need for pesticides.

Another tool in the regenerative farmer’s toolbox is mulch, or organic matter laid on top of the soil. Mulch adds carbon content and therefore creates storage space for nitrogen and water. It also suppresses weeds and feeds beneficial microbes.

Industrial agriculture depletes the resources upon which it depends; regenerative agriculture builds up the depleted resources and gives back to the Earth.

Poor soil means poor yields. When fertilizer chews away at soil nitrogen, crops produce less. Based on three year-long experiments in wheat fields in China, scientists found that nitrogen fertilizer increased yields until the chemicals were used in excess. Past the tipping point, grain yields began to decline with increased fertilizer use.

But can regenerative agriculture feed the world? First, remember that hunger is a distribution problem, not a production problem. Every famine has been a result of policies that prevented distribution of available food to groups of populations. It’s not a matter of having enough food, but rather of how the food is distributed. Today, we produce enough calories to feed the global population; yet, hunger abounds. Thirty percent of all the food humans produce on this Earth is wasted.

Even so, leguminous crops would provide enough nitrogen to replace synthetic fertilizers. If all the fields under agricultural production used leguminous cover crops during fallow periods, there would be fifty-eight more metrics tons of nitrogen available than the eighty-two metric tons of synthetic nitrogen currently in use worldwide. This would provide sufficient nitrogen for crop uptake and to maintain yields.

Industrial agriculture is also particularly vulnerable to climate change. Heat waves, floods, and droughts are just some of the known symptoms of our planet’s feverish state that can damage food supply.

Soils with crumbling structures leave us vulnerable to these changing conditions. Poor soil structure leads to erosion in times of flooding, sweeping away nutrients necessary for production. Structure-less soils are simultaneously susceptible to droughts because they lack space to store water.

In a vicious feedback loop, soil erosion worsens climate change. Soils are an important carbon sink, serving as the foundation of carbon uptake through plants. So when soils degrade, stored soil carbon is released and the nutrient-deprived plants take in less carbon. About half of the U.S.’s agricultural soils are degraded. On top of that, leached fertilizer that enters the atmosphere as nitrous oxide traps heat and contributes to climate change.

Healthier soils, on the other hand, are both a climate adaptation and mitigation tool. Cover crops create stable compositions of soil particles that withstand climate threats. Farmers can better grapple with extreme floods when their soils are strong enough to resist erosion. They can better confront droughts when their soils hold more water: Every 1 percent increase in organic matter can increase the water holding capacity of soil by 20,000 gallons.

But the policy space to support healthy soil practices is still wide open. Currently, crop insurance programs, heavily subsidized by the federal government, ironically disincentivize the very regenerative practices that secure long-term yield. Crop insurance only covers a few select commodity crops, leading to the monocultures that go hand in hand with heavy fertilizer use. Yield exclusion lets farmers ignore bad years when reporting yields to get insurance, so they can take more risks and keep extractive practices. Most insurance coverage goes to a small group of big farms. But a diverse, non-partisan coalition called AGree is calling to remove the disincentives for leguminous cover cropping, eliminate the yield exclusion option, and cap federal subsidies for crop insurance used by large-scale farmers.

Environmental justice can grow through healthy soil policies, too. In California’s San Joaquin valley, policy-makers and community organizers are connecting the dots between healthy soils and healthy communities. Soil organic matter reduces the need for harmful fumigants and slows water contamination. Dairy, farm, and food ‘waste’, which generate harmful emissions when sent to the landfill, can instead become compost for the soil and create jobs for the local community.

Healthy soils policies must take into account chronic land access issues – only when sustainably-minded farmers secure land will they invest in it. Black, indigenous, and immigrant farmers who have been systemically barred from land ownership should be centered in such policies. On the frontlines of climate change, Black, Indigenous, and People of Color (BIPOC) farmers confront it through building soil health.

As major landowners, municipalities can use their land to advance regenerative agriculture, too. Boulder County, CO is leasing some of its 25,000 acres designated for agricultural use to local farmers to test regenerative practices. On average, fifteen percent of any given city’s land is vacant. Vacant lots and brownfield sites could become urban gardens and food forests, balanced with community needs for affordable housing. Urban gardens not only build soil health, but also provide food, build community resiliency, and improve air quality for residents.

As fertilizer use increases, soil erodes. As soil erodes, so does our capacity to grow the food that sustains us. Excessive fertilizers turn soil abundance into scarcity, creating a dependence on destruction. Will we learn from the Earth, and regenerate abundance instead? The stakes of this question couldn’t be greater – after all, as Franklin Roosevelt once said, “A nation that destroys its soil, destroys itself.”

More about the author: Masha Vernik advises municipalities on food policy responses to the COVID crisis with the aim of building long-term resiliency. She collaborates with grassroots groups to ensure our policies are equitable and effective. Masha loves food and wants to create a friendly environment for farmers to grow it regeneratively. She is interested in agroecokogy, indigenous knowledge, and seed sovereignty. She just finished producing Common Roots, a short documentary profiling an urban farm in East Boston that builds community resilience. She holds a B.A. in International Relations with a minor in Biology from Boston University.