The world’s largest offshore wind farms are off the coast of Scotland. New York’s economy will “build back better” by advancing renewable energy and combating climate change July 21, 2020 By Ramona du Houx During his daily pandemic news briefings, on many occasions New York State’s Governor Andrew M. Cuomo would say, “we must build back better,” refereeing to how […] 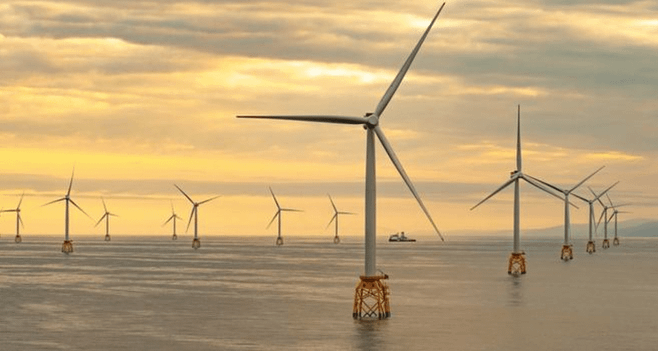 The world’s largest offshore wind farms are off the coast of Scotland.

During his daily pandemic news briefings, on many occasions New York State’s Governor Andrew M. Cuomo would say, “we must build back better,” refereeing to how his state would reenergize and rebuild the state’s beleaguered post-COVID-19 economy.

On July 21, Governor Andrew M. Cuomo announced the largest combined clean energy solicitations ever issued in the U.S., seeking up to 4,000 megawatts of renewable capacity to combat climate change.

“During one of the most challenging years New York has ever faced, we remain laser-focused on implementing our nation-leading climate plan and growing our clean energy economy, not only to bring significant economic benefits and jobs to the state, but to quickly attack climate change at its source by reducing our emissions,” said Governor Andrew Cuomo.

“With these record-breaking solicitations for renewable energy and new port infrastructure, New York continues to lead the way with the most ambitious Green New Deal in the nation, creating a future fueled by clean, renewable energy sources,” added Cuomo.

“Governor Cuomo’s progressive renewable energy policies and commitment to innovation have made the clean energy sector an engine for job and economic growth,” said New York State Department of Labor Commissioner Roberta Reardon. “Labor has played a vital role to ensure the jobs created through green infrastructure will pay a prevailing wage.”

Offshore wind floating platform prototype developed at the University of Maine. The unique technology has the ability to be positioned far out to sea so that they won’t disrupt the view. They also are better on maintenance and performance. A full scale Volturnus is in the making. Photo by Ramona du Houx

New York’s second offshore wind solicitation seeks up to 2,500 megawatts of projects. This will be the largest in the nation’s history, in addition to last year’s solicitation which resulted in nearly 1,700 megawatts awarded.

Offshore developers will be required to partner with any of the 11 prequalified New York ports to stage, construct, manufacture key components, or coordinate operations and maintenance activities. New York is competing aggressively with New Jersey, Connecticut, Maine and other states to attract offshore wind jobs and manufacturing facilities.

The RFP prioritizes funding for projects that will be operational quickly to help restart New York’s economy and that will drive additional private investments in the industry and directly support offshore wind projects.

The plan has the potential to bring New York State halfway toward its goal of 9,000 megawatts of offshore wind by 2035 and meet the environmental goals under state’s Climate Leadership and Community Protection Act.

The 11 prequalified sites are located from Long Island to the Capital Region. These sites, now eligible to partner with offshore wind developers for up to $200 million in public funding for direct use in advancing an offshore wind project and the long-term industry, have the potential to support various supply chain end uses such as staging, installation, manufacturing and operations and maintenance.

In addition to the offshore wind solicitation, the Governor also announced the issuance by NYSERDA and NYPA of the nation’s largest coordinated solicitations for land based large-scale renewable energy projects by a U.S. state, under the State’s ambitious Clean Energy Standard. These combined solicitations seek to procure over 1,500 megawatts of clean, renewable energy, enough to power nearly 500,000 homes.

NYSERDA will host a webinar on this request for proposals and the submittal process for potential proposers on Tuesday, August 4, 2020 at 1:00 p.m. EDT.

“These investments put us at the forefront of the transformation to clean energy … To achieve our national-leading goal of 100 percent carbon free electricity by 2040 and to make lasting impacts against the ravages of climate change, we must act now. NYPA’s solicitation calls for utility-scale renewable projects that will produce an annual output of up to 2 million MWh or more. As these major solar and wind projects, some with an option for storage, come online we will reduce emissions, harness our abundance of natural resources, and boost economic development in all regions of our state setting the example for others,” said NYPA President and CEO Gil C. Quiniones.

Applicable land-based projects selected will be fast-tracked to construction under groundbreaking legislation passed in the budget to vastly accelerate renewable energy siting to ensure the projects are developed responsibly and quickly so the state meets its CLCPA mandate.

The solicitations prioritize hiring in Environmental Justice Areas and benefits to disadvantaged communities in line with the state’s new climate law.

“New York is making another huge leap to ensure we jumpstart clean energy development which will not only help create a cleaner environment, it will spur economic growth across the entire state,” said State Senator Kevin Parker.

The solicitations also send a clear buy-clean demand signal to the market to spur the use of advanced materials, like carbon-negative cement, and other strategies to reduce the carbon footprint of future large-scale renewable projects.

Coupled with critical siting reforms in the enacted budget, the plan is a comprehensive acceleration towards achieving New York State’s mandate to secure 70 percent of the state’s electricity from renewable energy by 2030.

In aggregate, the offshore wind, port infrastructure, and land-based renewable trifecta of solicitations seek to procure approximately 12 million megawatt-hours, enough to power over 1.5 million homes annually. Together, taking into account the value of avoided carbon emissions, this will deliver a combined $3 billion in net benefits over the 20- to 25-year life of the projects.

“We seek solicitations that bring forward jobs and growth. The focus is on collaboration and benefits coming to disadvantaged communities and environmental justice,” said NYSERDA acting chief executive Doreen Harris on a call. “We are going big as we know it will bring forward the best projects in the industry.”

The clean energy industry has proven to be a strong economic driver, outpacing growth in the national workforce by nearly twice the rate pre-COVID and will have a pivotal role in creating short and long-term economic activity to help local economies rebound from the pandemic after reopening.

The State’s issuance of coordinated land-based renewable energy solicitations as part of a series of procurements under the state’s Clean Energy Standard is expected to result in the development of dozens of new large-scale renewable projects over the next decade. New York has awarded 67 large scale renewable energy projects since 2018 – the most significant State commitment to renewables in the nation. These previously announced land-based renewable awards combined with New York’s record-breaking commitment to offshore wind announced last year will be capable of generating over 11 percent of the state’s expected electricity demand in 2030.

In seeking at least 1,000 megawatts of offshore wind, coordinated with a $200 million opportunity to support local and private investment in port infrastructure, NYSERDA will accept offshore wind bids between 400 megawatts and up to 2,500 megawatts. Bids for this combined offshore wind and ports solicitation are due October 20, 2020.

The overall plan builds upon the Accelerated Renewable Energy Growth and Community Benefit Act, passed as part of the final enacted State budget, which will significantly help to speed up the pace of renewable energy development across the state and accelerate the planning and build out of bulk and local transmission and distribution infrastructure. This law creates a first in the nation Office of Renewable Energy Siting to improve and streamline the process for environmentally responsible and cost-effective siting of offshore wind and large-scale renewable energy projects while delivering significant benefits to local communities. It also includes critical provisions that will help to pave the way for delivering clean electricity to New Yorkers upstate and downstate by prioritizing necessary upgrades to the power grid.

The Climate Leadership and Community Protection Act puts New York on a path to reach its mandated goals of economy wide carbon neutrality and achieving a zero-carbon emissions electricity sector by 2040. It builds on New York’s ramp-up of clean energy including a $3.9 billion investment in 67 large-scale renewable projects across the state, the creation of more than 150,000 jobs in New York’s clean energy sector, a commitment to develop over 1,800 megawatts of offshore wind by 2024, and 1,800 percent growth in the distributed solar sector since 2011.

New York’s Climate Action Council is working on a scoping plan to build on this progress and reduce greenhouse gas emissions by 85 percent from 1990 levels by 2050 while ensuring that at least 40 percent of the benefits of clean energy investments benefit disadvantaged communities.