Oped by San Luis Obispo Mayor Heidi Harmon, Published in The Tribune As a mom, I know that my kids’ futures depend on immediate action to halt the deepening climate crisis. As mayor of San Luis Obispo, I know the power of our communities working together, and why California must lead this fight to address […] 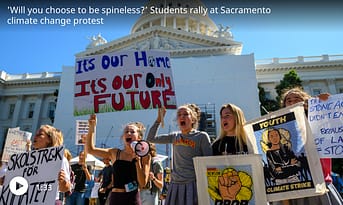 As a mom, I know that my kids’ futures depend on immediate action to halt the deepening climate crisis.

As mayor of San Luis Obispo, I know the power of our communities working together, and why California must lead this fight to address the climate crisis at its source.

That’s why I’m joining more than 275 local elected officials from 47 counties calling on Gov. Gavin Newsom to create a plan to phase out oil and gas production in California.

From severe wildfires, droughts, mudslides, disease, and superstorms, the impacts of the climate crisis and producing and burning fossil fuels are growing increasingly devastating.

I promised my kids that I would do everything I could to ensure that they had a good life, and that includes fighting the climate crisis.

As our young people strike in the historic global youth-led climate strikes, we must follow their lead. We have an obligation to act, because if we do not, our families will live increasingly impoverished lives in an increasingly harsh world.

As superstorms sweeping our coastlines and the fires burning our communities grow more intense, we need policy responses to move more quickly than the climate crisis’s effects. We need a policy response that centers the working class in a just transition to clean energy, so that we can move as entire communities away from dirty energy.

That’s why San Luis Obispo has one of the most ambitious carbon neutrality goals of anywhere in the U.S., setting a target of becoming carbon neutral by 2035.

Fighting climate crisis has become a key part of our culture. We’re implementing economically and socially just solutions like producing more compact, mixed-use housing closer to major employment areas, reducing organic waste flow to landfills by redirecting it to an anaerobic digester, using the gas byproducts of wastewater treatment to actual fuel the system, and expanding electric, energy-efficient options throughout the city.

We must phase out this dangerous industry that is poisoning our communities. The huge human costs of fossil fuels is staggering, already costing Californians more than 12,000 lives and $100 billion dollars annually in public health and climate damages, according to one Stanford University study.

Fortunately, local governments across California are leading the way.

Now, we need the state of California to follow our lead.

That’s why 275 local elected officials across California are urging Gov. Newsom to create a plan to phase out oil and gas drilling, a 2,500-foot public health drilling setback, and commitment for the state to generate 100 percent clean, renewable energy.

To start, California must stop issuing new permits for oil and gas drilling — including fracking, which increases earthquakes, potentially with disastrous results.

This is the leadership we need from our governor to protect our children from the climate crisis.

We must keep fossil fuels in the ground, so that all our kids have a future to look forward to. California must lead the way.

Heidi Harmon is the mayor of San Luis Obispo.