Elected Officials to Protect America urges lawmakers to defend our First Amendment rights from the fossil fuel industry By Maegan Brejnik The Constitution and the Bill of Rights are pieces of history that have become increasingly more relevant in modern day. Currently, individuals and groups are under fire for peacefully protesting, an action which is specifically protected by the First […] 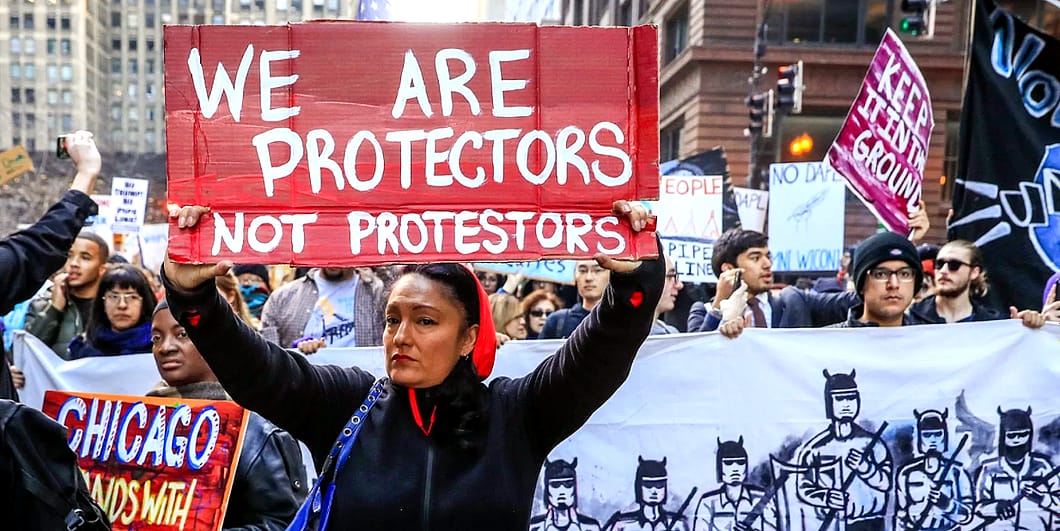 The Constitution and the Bill of Rights are pieces of history that have become increasingly more relevant in modern day. Currently, individuals and groups are under fire for peacefully protesting, an action which is specifically protected by the First Amendment.

The right to peacefully assemble is paramount in any functioning democracy, as it allows citizens to exercise their freedom of speech without fear of government retaliation. There are many long standing issues that continue to be protested, yet corporate reactions to anti-pipeline protests are setting a dangerous precedent. The Elected Officials to Protect America (EOPA) sees this as a threat to America’s rule of law, and strongly condemns the wave of legislation in numerous states that have been eroding the First Amendment.

In 2018, Louisiana passed pipeline-protecting legislation, which would increase criminal penalties for protesting against gas and oil pipelines, as well as other “critical infrastructure.” Louisiana is not alone; Tennessee, Indiana, Oklahoma, North Dakota, South Dakota, and Texas have similar laws. In March of this year, amidst the beginning of lockdown, Kentucky, South Dakota, and West Virginia joined that list, with bills under review in Alabama, Minnesota, Pennsylvania, and Ohio as well.

The specific language of anti-protesting laws designate oil and gas pipelines, along with their facilities, as critical infrastructure. This distinction allows for greater charges to be filed against those who vandalize them, or pose as a threat of vandalization.

These laws are restricting a right inherent to every individual, as well as providing a path that would potentially remove that right from the public. While it varies state by state, this legislation allows for charges to be levied for threatening violence or vandalization against the newly dubbed critical infrastructure. In South Dakota, the wording of the legislation includes the term “riot boosting,” which can be broadly interpreted to include any act that passionately opposes oil and gas projects. The line is blurring between what it means to be involved in a protest, so much so that sharing the time and place of an approaching protest could constitute a criminal offense.

EOPA fears the issue will not remain contained.

“The fossil fuel industry has been using the cover of COVID-19 to push their own agenda, trying to lay the groundwork for further criminalization of protests. If we don’t address this issue now the First Amendment will be eroded further until it is rendered obsolete. Law is all about precedent. The more anti-protest laws on the books in different states, the more we risk setting a precedent that could be taken to the Supreme Court,” said Oregon State Representative Major Paul L. Evans USAF (Ret.), EOPA Co-Chair. “We can’t turn our backs on an amendment that shows the power of the people’s voice is protected in our democracy. We are not an autocratic nation.”

Framing nonviolent acts of protest as terrorism is not hypothetical, it is happening accros the nation now. Louisiana activists protested the pollution of their community, using boxes of plastic pellets labeled with a disclaimer and description. The boxes of plastic particles were deemed “threatening,” and as a result the organizers of the protest face a maximum of 15 years in prison and $15,000 in fines for terrorizing defined as “the intentional communication of information that the commission of a crime of violence is imminent or in progress or that a circumstance dangerous to human life exists or is about to exist.”

President Trump shared a letter written by veteran attorney and former Trump lawyer John Dowd, specifically describing peaceful protestors as terrorists. He claimed that “the phony protesters near Lafayette park were not peaceful and are not real. They are terrorists using idle hate filled students to burn and destroy.” Such a blatant labeling indicates a pattern in lawmaking and governmental reactions.

This terrorism branding allows for greater penalties to be applied and it actively discourages future uses of the First Amendment. Exercising the right to peacefully assemble should not make a person a felon.

“The rights established in the First Amendment exemplify the foundations upon which this nation was built. Laws exist to serve the interests of the public, not the private interests held by the fossil fuel industry and lawmakers in their pocket,” said Alex Cornell du Houx, a former Maine state lawmaker, Marine combat veteran, and President of Elected Officials to Protect America (EOPA). “Elected officials have taken an oath to uphold the Constitution, yet the actions in these states indicate widespread corruption. If lawmakers do not possess the integrity to stand up to individuals and corporations that hurt the health and wellbeing of their constituents, the founding principles of our nation will be eroded away.”

The fossil fuel industry has been embedding themselves into societal systems for years. Louisiana, a state responsible for 25 percent of US domestic oil production, has the audacity to host an annual celebration that praises oil called the  Shrimp and Petroleum Festival. Oil corporations have a grip on the state. Louisiana State University is strongly defined by the business and culture of the oil industry. Recently, a school board in Louisiana voted not to provide Exxon Mobil a tax break, despite the donations and volunteer hours the corporation provides to local schools. As a result, Exxon Mobil introduced a bill to take that approval power away from local officials.

The oil industry has shown that if they don’t like the decisions around them, they are willing to use their influence to benefit their corporations. They’ve embedded themselves solidly in the culture and education of the nation, as evident by Louisiana, and now they are leveraging their influence to restrict activists and protestors who simply wish to showcase their beliefs.

“The fossil fuel industry is corrupting our education, environment, culture, and laws. If they aren’t stopped, they will stop millions from exercising their right to peacefully assemble, their right to nonviolent protest,”  said New Mexico State Representative Debbie Sariñana, Air Force veteran, EOPA Co-Chair. “Elected Officials to Protect America will not sit by and watch those in positions of power abuse the global health crisis to silently push an agenda that punishes people for exercising their legal rights. We stand by those who are facing illegitimate criminal charges, and are encouraging other elected officials to do the same.”

In June of 2020, Louisiana Governor John Bel Edwards vetoed a bill that would have increased penalties for trespassing on fossil fuel property. This is a victory for not just activists, but for all Louisiana residents. However, the battle is not yet over. With enough votes in both houses of the State Legislature, the Governor’s veto could be overturned.

In West Virginia, days after the COVID-19 lockdown went into effect, Governor Jim Justice signed into law the Critical Infrastructure Protection Act. With much of the nation distracted by a pandemic, this Act would increase felony penalties for protest actions that target oil and gas facilities.

Mississippi is facing a similar threat; a bill criminalizing anti oil and gas protesting has passed in both houses of the State Legislature with a disturbing majority. While the bill is not yet in action, it is expected that Mississippi’s Governor will soon sign it into law.

This issue has been proven to extend to multiple states.

Elected Officials to Protect America encourages lawmakers to stand up to the fossil fuel industry. Our voices are stronger together. We cannot allow our fundamental right to peacefully protest be stripped away.

The mission of EOPA: To create a safe, prosperous, and healthy planet, we empower leadership from elected officials and civic leaders to protect our environment, and fight the climate crisis. As current and former elected officials who care deeply about protecting our planet and people from the dangers of climate change, EOPA educates through value-based storytelling, trains lawmakers, and connects elected officials to inspire strong environmental policy. Lawmakers who are veterans and elected officials lead our mission.