Elected Officials to Protect America—a group of state and local level office holders pushing for expedient climate action—called for Newsom to stop issuing oil drilling permits in the state. By: Steve Horn | August 6, 2020 Published in the Real News Network California-based multinational oil company Chevron landed two rounds of drilling permits from Gov. Gavin Newsom this summer—evidence, climate advocates say, that Newsom is not committed to tackling the climate crisis. The permits bolster Chevron’s position in the Lost Hills Oil Field, the sixth most prolific field in industry-heavy Kern County, and will shift drilling in the field largely towards using power from solar panels. One critic called the way the permits use climate crisis rhetoric “Orwellian,” incorporating solar power into drilling […] 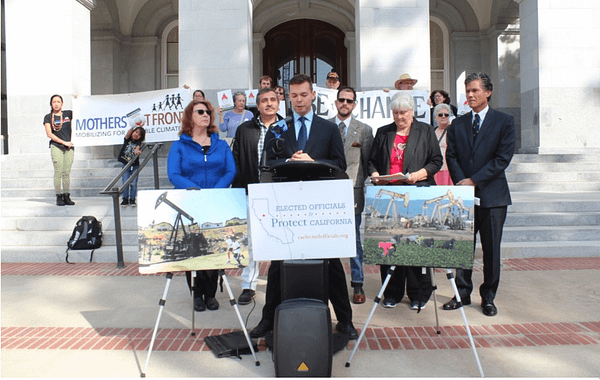 In the Daily Kos.   By Dan Bacher  Wednesday July 15, 2020 · Elected Officials to Protect California (EOPCA ), a coalition of current and former elected officials opposed to fracking and increased oil and gas drilling in the state, is asking why California Governor Gavin Newsom is helping the failing fracking industry by overseeing an expansion of fracking operations during a […]

The future is not to frack

OLIVIA PELUSO JANUARY 26, 2020 By Olivia Peluso is a Mustang News opinion editor. The views expressed do not necessarily reflect those of Mustang News.  The Bureau of Land Management (BLM) released a statement explaining their decision to allow fracking and oil drilling in eight California counties, including San Luis Obispo County. Land within Montaña de Oro and the Carrizo […]

Catie Keck12/16/18 1:45PM• In GIZMODO As the Green New Deal pioneered by Alexandria Ocasio-Cortez continues to gain momentum, the plan to wean the U.S. off of fossil fuels has now found support in more than 300 local and state government officials who called for the initiative in an open letter on Friday. The letter from environmental nonprofit Elected Officials to Protect America and signed by 311 officials from 40 states pointed to extreme weather phenomena exacerbated by climate change that are already affecting communities across the nation and costing billions to manage in their aftermath—dire issues that are only going to worsen as our planet continues to warm. “Our nation’s mightiest cities have been flooded by unprecedented superstorms including Sandy, Katrina, Harvey, and Maria. Scientists warn […]