California is a tinderbox: examining the role of fossil fuels By Olivia Baaten California has been shattering records and trouncing projections as cases of Coronavirus soar, averaging 8,000 new cases per day. As California once more braces for shutdown, economic devastation is sure to follow. Now the state may face even more sinister problems, as fire season approaches.   According to […] 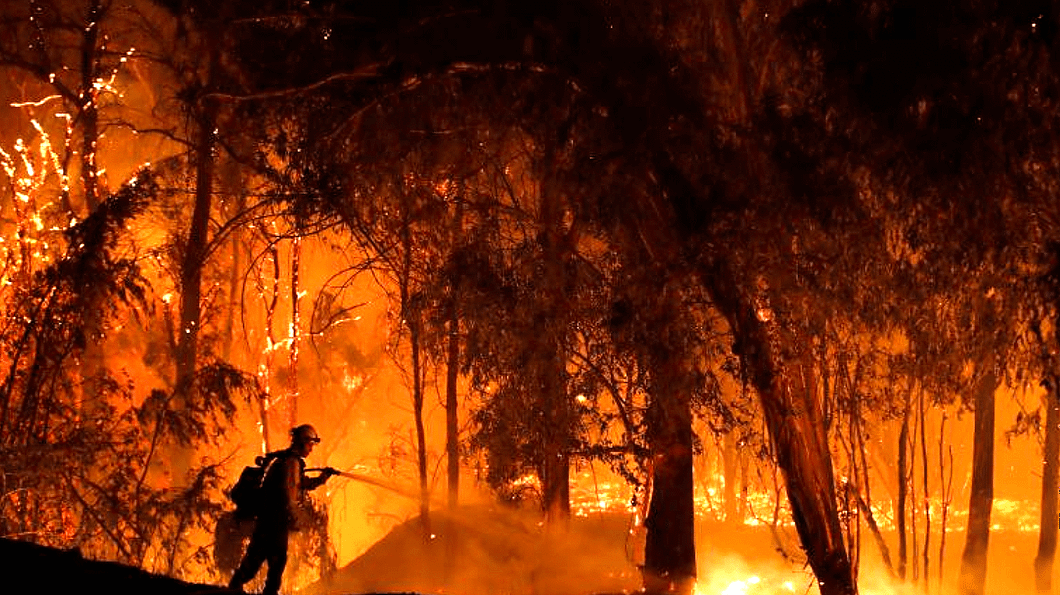 California is a tinderbox: examining the role of fossil fuels

California has been shattering records and trouncing projections as cases of Coronavirus soar, averaging 8,000 new cases per day. As California once more braces for shutdown, economic devastation is sure to follow. Now the state may face even more sinister problems, as fire season approaches.

According to the California Air Resources Board, the climate crisis, primarily caused by the combustion of fossil fuels, considerably increases the frequency and severity of wildfires. Elected Officials to Protect California (EOPCA), a nonpartisan, nonprofit organization suggests that the exacerbation of fire season can be preempted by phasing out fossil fuel reliance in California.

“We can mitigate these disasters if we stop fueling the flames of climate change caused by the oil industry. We have to stop oil production in California and transition to 100 percent clean, renewable energy,” said Oxnard Mayor Pro Tem Carmen Ramirez, Esq, EOPCA Steering Committee Member.

Elected Officials to Protect California (EOPCA) brought over 310 elected officials together to sign a letter to Governor Gavin Newsom urging him to take action now and: 1)  End the issuance of permits for new fossil fuel projects, 2) Design a swift, managed decline of all fossil fuel production, starting with a 2,500-foot human health and safety buffer zone to protect public health and address the severe environmental injustice of production in low-income communities and communities of color, and 3) Commit the state to 100 percent clean, renewable energy, phasing out all usage of fossil fuels. EOPCA believes that if these measures are implemented the fire season can be mitigated.

In the era of COVID-19 the risk of wildfire could come with a myriad of potential externalities, all of which would be disastrous for California. According to the CDC wildfire smoke wreaks havoc on respiratory health, making California residents more susceptible to COVID-19. Compounding the problem, the masks needed to protect from smoke are the very same that prevent the proliferation of COVID-19. Despite all the governor’s efforts this life-saving equipment is still in short supply.

In 2018, the Camp Fire killed 85 people, consumed 11,000 homes, and forced 50,000 Californians to flee seeking refuge outside of Paradise. One year later, most of these traumatized families are still unable to return home. A scant eleven homes have been rebuilt. California suffered financially as well, as the Camp Fire was estimated to have been the most expensive natural disaster in the world in 2018 with damages piling up to a striking $16.5 billion.

Of those forced to flee, Chico State researchers found that older populations left the area at a much higher rate than those between the ages of 18 and 65. Those on fixed retirement incomes suffered disproportionately; 47 percent of those whose annual income was less than $25,000 moved 30 miles or more from Paradise. This vulnerable older population is the same demographic that is most susceptible to COVID -19.

“We already had a tight housing market before the fire. I’m proud of how our residents opened their hearts and doors to those displaced from the Camp Fire. But in the long term we simply didn’t have enough housing in Chico to permanently accommodate everybody. The fire changed the demography of our city,” said Chico Mayor Randall Stone, EOPCA letter signatory. “With each fire season the stress level rises. The Hog Fire has a lot of people reliving the Paradise tragedy. The tension is palpable. I know California can help mitigate these climate disasters if the state takes action to stop all fossil fuel production. Right now, we’re pouring gasoline on a fire.”

Paradise was not the only city ravaged by wildfire. California saw a whopping 7,860 wildfires during the 2019 fire season; 259,823 acres of land were reduced to ash, 732 structures were engulfed in flame, and three people lost their lives.

“Every year the fire season worsens. Last year in Ventura County the Easy Fire consumed more than 1,800 acres and threatened 6,500 homes. The 275-acre brush fire named the Elizabeth Fire was our first major wildfire of 2020. People are already under stress because of the pandemic, the fire season is only exasperating an already troubled time,” said Oxnard Mayor Pro Tem Ramirez.

Where residents of the paradise fire, Camp Fire, went after the disaster.

Driven by the climate crisis the wildfire season is now seventy eight days longer than it was in the 1970’s. Accordingly, the number of wildfires have significantly increased.

Wildfire season is projected to make a vengeful reappearance in 2020. Indeed, conditions in the West are expected to be dry and windy. These circumstances skyrocket the probability of wildfire. Governor Newsom acknowledged the threatening nature of these conditions, as he has increased fire prevention efforts and firefighting; yet, he has not meaningfully addressed the exigence of California’s increased vulnerability to wildfire. From the building evidence, it’s clear California will continue to suffer grievously from wildfires until the Governor substantially examines the fossil fuel industry as perpetrators of the climate emergency and takes appropriate action.

Indubitably, wildfire conditions are encouraged by the onslaught of the climate crisis. Between 1985 and 2015, wildfires in California have doubled as a direct result of changing climate conditions. Indeed, California has experienced dryer seasons and hotter temperatures, as precipitation levels have decreased 30 percent since 1980, and temperatures have increased by 1.8 degrees Fahrenheit. Under these conditions soil hemorrhages moisture and wildfires proliferate, coaxed to life by obstreperous California winds. Doug Morton, chief of the Biospheric Sciences Laboratory at NASA’s Goddard Space Flight Center in Greenbelt, Maryland explained that, “Where warming and drying climate has increased the risk of fires, we’ve seen an increase in burning.”

Scientific evidence shows fossil fuel industries are undeniably culpable, as the top 90 companies produce over 50 percent of the world’s greenhouse gas. These companies knowingly endangered the lives of many global citizens. Indeed, in 1977, Exxon Mobil’s own researcher warned that combusting fossil fuels could have detrimental consequences for the planet.

In Australia, the cataclysmic effects of global warming on wildfire season are apparent. Following record levels of drought and heat Australia’s megafires have perpetrated extreme loss of biodiversity, acres upon acres of scorched land and most tragically loss of human life. “This length of [fire] season is unprecedented,” commented Australian Prime Minister Scott Morrison.

Alarmingly, California is beginning to resemble Australia. Wildfires are slated to increase overall as California will see a 30 percent increase in lightning-related wildfire occurrences before 2060.

Pacific Gas and Electric Company (PG&E) is a key supplier of natural gas and electricity; natural gas supplied California with close to 47 percent of in state electricity generation in 2018. However, one of California’s most catastrophic fires, the Kincade fire, was the direct consequence of California’s dependence on fossil fuels. This devastating incident was caused by the ignition of PG&E equipment, illustrating the blatant endangerment of communities perpetrated by fossil fuel dependence.

Such fires may seem even more threatening in the context of COVID-19. Hospitals and homes are negatively impacted by preemptive blackouts, intended to prevent the exacerbation of residential wildfires. In addition to harming families, these shutdowns have the potential to threaten overburdened hospitals.

Despite their disproportionate contributions to fire season, fossil fuel companies are receiving $1.9 billion in tax breaks. In 2018 wildfires cost Californian taxpayers $400 billion, raising concerns about the economic toll of the fire season during the pandemic fueled economic recession.

With social distancing mandated during the pandemic, ensuring shelters where residents might have to flee during a wildfire are available with these provisions is a challenge Gov. Newsom must address. EOPCA maintains that the governor  wouldn’t be in this situation if he’d already addressed the fossil fuel climate crisis.

“Chico was the first city to declare a Climate Emergency,” said Chico Mayor Stone. “It’s time for the state to issue a Climate Emergency Decree. That way we can start to take emergency action to abate the climate crisis before it’s too late. Sacramento has to put our people’s lives and livelihoods above corporation profits.”